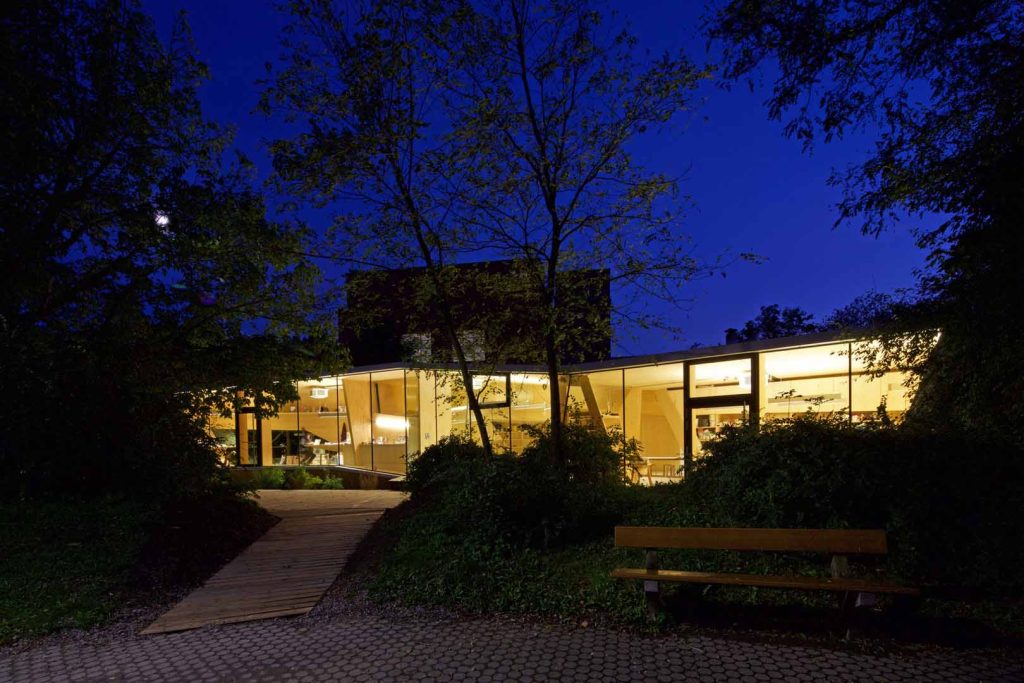 bilding is a midsized academic design/build project planned and realized in Innsbruck, Austria, that offers a space where children and young people can explore the arts and programs to support youth in building their artistic interests and talents. In the bilding workshops, artists and architects introduce youth to painting, sculpture, architecture, and new media. The experimental space invites all to enter, play, and work with the structure. It has no barriers as it is open and free to everyone passing by. The daylight flushes through the building, and the two fanlights bring strong light into the main internal space. The rough wooden structure in the spatial continuum is used as a tool. Its surface is not treated and encourages the children to adopt it as a workshop and studio. “It creates a sense of being embedded in the park, with landscape inside and outside.”

bilding provides a continuous program in the visual, applied, and fine arts, ranging from aesthetic early childhood learning for toddlers, to age-specific guidance for children and adolescents, to support of the creativity of young adults. The goal is to promote imagination, encourage alternative ways of expression, and help children develop confidence in their skills and artistic abilities.

The format mobilding reacts to the plight of people who have fled their home countries. Restricted mobility, especially of refugee youth, prompts bilding artists to work creatively with young people on site in refugee homes. mobilding positively supports the everyday life of children from asylum-seeking families and promotes integration.

Students collectively developed the project, giving them the opportunity to sharpen their skills, form networks, take on added responsibility, and grow beyond themselves. The construction site was a public space that became a living architecture mediation through constant exchange with the population. During the construction phase, several workshops were held with future users, thus integrating them into the process. Sponsors, donors, students, and others were regularly on the construction site to observe progress. Their cooperation, expertise, skills, funds, and energy were fundamental to the realization of a new space of creativity.

More than three thousand children and young people attend the courses at bilding each year. bilding was approved as a temporary structure for five years but, because of its wide acceptance, it has now been approved to become a permanent building.

Inspired by bilding, Innsbruck University commissioned a company kindergarten in the context of design/build. The city of Innsbruck also commissioned a temporary district center where institutionalized work to integrate citizens takes place. The aim is to provide a gathering space and encourage community involvement.

The students formed an enthusiastic collective that, five years later, still inspires them to initiate new projects and take part in contemporary discourse. Design/build projects generate a fundamental awareness in architectural education, which is an agent for social change. During the learning process, students’ responsibility, aspiration, and passion for architecture are strengthened. Students thus become ambassadors for architecture. The university and faculty also become more influential through design/build projects. The built object becomes a real instrument, which directly refers and reacts to cultural, social, and political conditions.