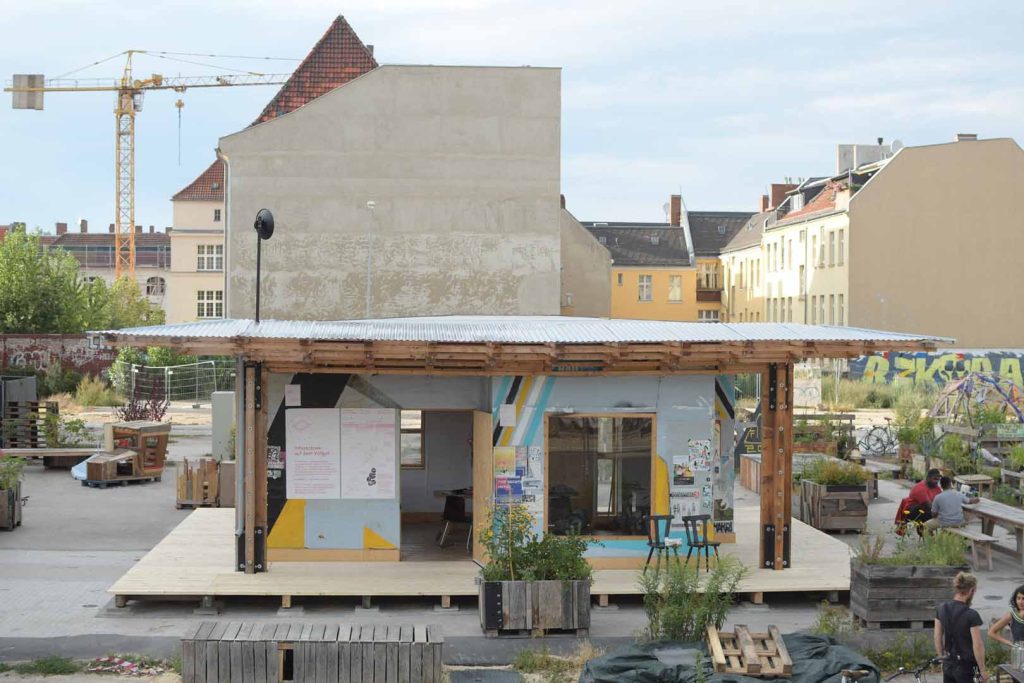 The Infozentrale is a public, collectively organized, noncommercial “space for all” on the Vollgut site in Berlin Neukölln. It was designed and built by a group of 36 students as a design/build project of the Natural Building Lab at the TU Berlin. The building serves as a prototype for resource-positive construction in an urban context and embodies a new method of architectural production for a postconsumer society. The Infozentrale is being used to showcase up-to-date information about processes and designs being developed for the site.

The Infozentrale is located on one of the last large urban ex-industrial sites remaining in the area. Many new community-oriented projects are planned for the site. The Infozentrale was conceived as a prototype for a circular construction system in which recycled and waste materials can be given a further usage cycle. During the design phase, students experimented with creating new constructive elements from waste materials.

The Infozentrale is intended as a lively space where discussions about the further development of the site can take place as well as a test bed for activities creating a network of initiatives and institutions in the neighborhood. Developing different usage scenarios and related spatial requirements became an essential part of the collaborative design process.

From the outset, the project connected a network of participants well beyond the university. Reflection rounds (known as “Big Circles”) enabled students and future users to gain trust and confidence in the collaborative process. As future users were part of the ideation process, they soon took over responsibility for the Infozentrale.

Since its “completion” in 2018, the Infozentrale has needed a number of makeovers, which was to be expected with a facade made of paper and cardboard. Over the last two years, it has provided a surface for the local neighborhood to express themselves, varying from the highly artistic to the deliberately destructive. These interventions, plus Berlin’s inclement winter weather, eventually meant that the Infozentrale received a more robust timber facade in spring 2020.

But this is only the most visible transformation. The Infozentrale has gone from a design/build project to a self-governed community project that is alive without the founders’ involvement. This transformation in ownership ensures that, despite it being “temporary,” the Infozentrale will evolve for many years to come.

The Infozentrale is the first design/build project realized by the Natural Building Lab. Prototypical aspects can be found in both construction and learning processes. The students worked together in a highly self-determined process and took on a great sense of responsibility for the project. The proximity of the site to the school of architecture allowed them and the teaching team to follow up with project development. Even though the school’s engagement is ongoing, operations have been completely taken over by local actors.