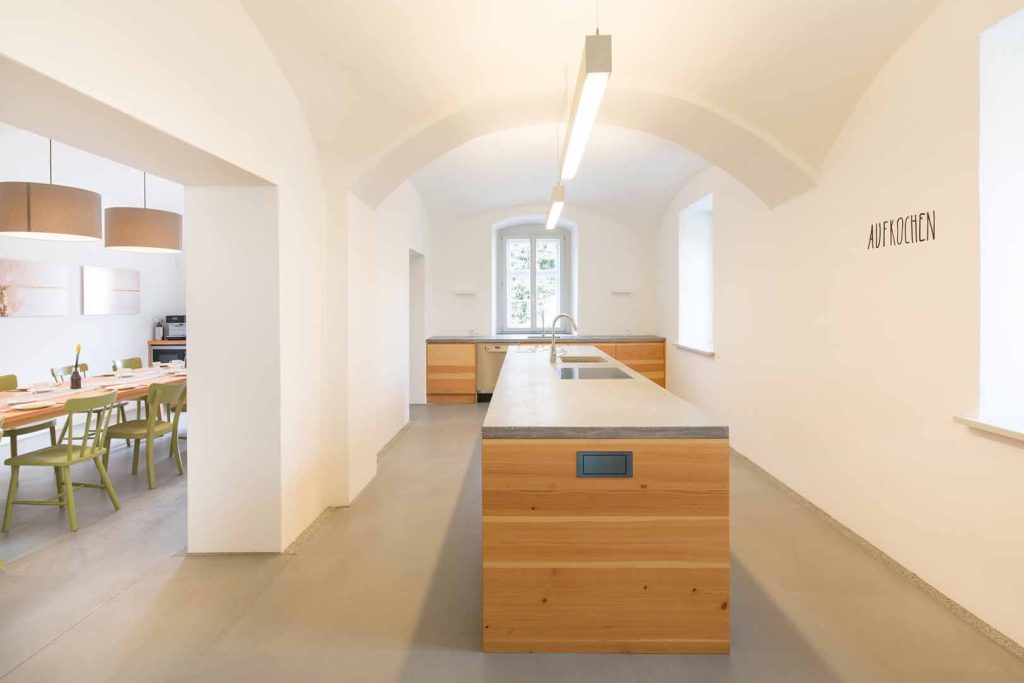 Unternalb Farm is located on a former farm estate of Göttweig Abbey in a small village in the Lower Austrian wine region. Since 1984, it has been run by the NGO Caritas Vienna as an institution for people with disabilities offering training and employment in organic farming and various handcraft work centers. A vacant side wing of the historical farm estate presented an opportunity to extend the farm’s space and program. The wing was to be converted into a bed-and-breakfast run by people with disabilities. Apart from giving the clients a new field of training, the new facility opens Unternalb Farm to a multilayered community of tourists and provides an inclusive experience.

Building within existing stock poses a challenge for a design/build project, especially in a listed building. It limits the design scope while opening up other areas of work. The Federal Monuments Authority Austria (BDA) was already involved during the first on-site design workshop and continued to support the entire process.

Only very rough plans were available, which meant that the students had to start by taking measurements of the existing structure, where literally no wall was at a right angle. The property had also been subjected to various alterations and installations, which had to be removed.

Designing for people with special needs was another important issue. Although the accommodation only has two floors, an elevator was installed, and special attention was paid to barrier-free bathrooms.

During an intensive design charette, the students stayed on site for one week to get to know the future users of their design and understand the site’s specific historic characteristics. Many discussions with stakeholders followed during the next five months, until the plans were submitted to the authorities.

In the one-year building phase, the design team worked with teams from the handcraft work centers of Unternalb Farm. Most of the students had never before worked with people with disabilities. This special constellation of people with very different backgrounds and skills offered mutual learning and exchange.

Since opening in spring 2016, the bed-and-breakfast has become the key component of Unternalb Farm. Most of the year, the 10 beds are fully booked. As many of the people who now run OBENauf were actively involved in the building process, they not only identify with the building but also know very well how to maintain it. They are proud of “their house” and enjoy showing guests around the extensive facilities.

The design/build studio at Vienna University of Technology offers students the opportunity to experience the different stages of a real building project. Nevertheless, the immediate goal is to give students the opportunity to evaluate the quality of their thinking against the constraints of the real world and to understand the implications of their decisions in a broader context.