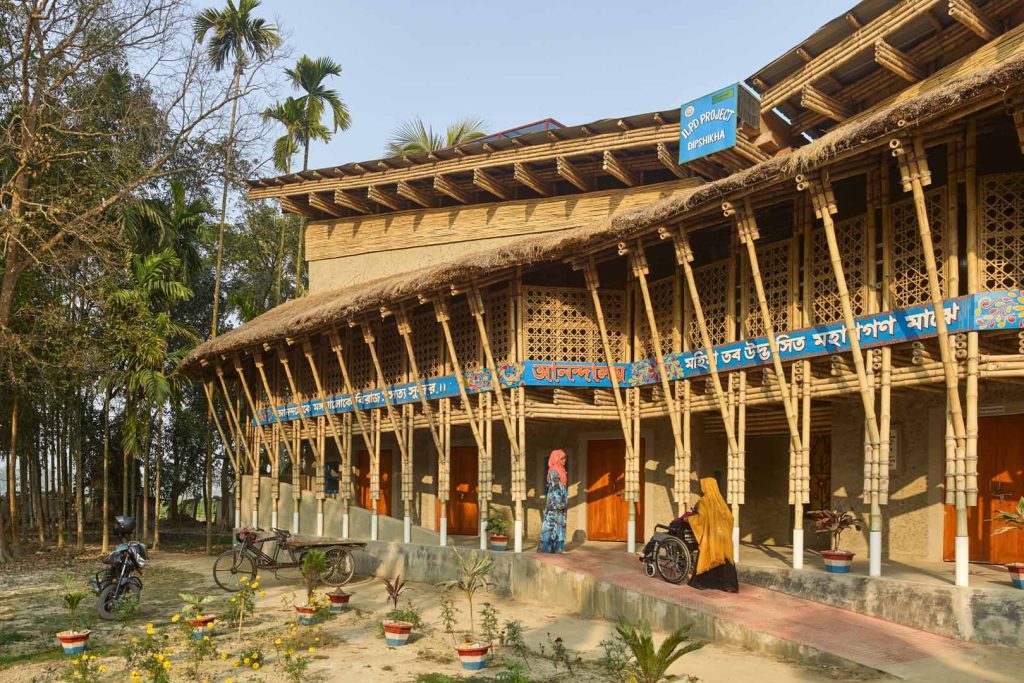 The Anandaloy Building hosts a center for people with disabilities combined with a small studio for producing fair textiles. Because the project was built by people from surrounding communities and constructed of resources supplied by local farmers, the largest part of the budget was invested in the local economy and its craftspeople. Thus, the building is much more than a structure—it has become a catalyst for local development. Initially planned as only a therapy center, the building was extended into another story hosting Dipdii Textiles, a studio for female tailors in the village.

This project aims to create awareness of inclusiveness and celebrate the beauty of diversity. As a visible sign of this inclusion, a big ramp winds up the first floor. Already during construction, it has been a topic of discussion among the many local visitors coming to see the site. What is the reason for that ramp? Why is it important to guarantee access to everyone, no matter if they are healthy or not? How can the lives of people with disabilities be improved? How can inclusion be incorporated?

Participation of the community happened mainly on the construction site. This site was managed by the Bangladeshi contractor and the team of the mud and bamboo workers from the village, including some persons with disabilities. Craftspeople and day laborers (male and female) came from the surrounding villages. Standing in front of the finished building, knowing that it had been built out of the dirt underneath one’s feet, using nothing but one’s own hands, generates an incredible boost of confidence and team spirit for everyone involved in the construction.

Environmentally, the Anandaloy project is built mainly out of mud and bamboo from local farmers. These natural materials along with hiring local workers foster a circular economy. After participating in the construction, local workers have the skills to work independently on other construction projects. The studio aspect of the project allows women to find work in their villages as an effective counteraction to urban-rural migration. As a whole, the Anandaloy Building not only provides therapeutic treatment for people with disabilities but also provides them an opportunity to learn and work in the community.

The architecture explores the plastic abilities of mud, using the “cob” technique, to create a stronger identity. Unlike other buildings in the area that have a rectangular layout, the Anandaloy Building dances in curves, and the ramp winds playfully around its inner structure. With its joyful curves the building radiates the message: Diversity is wonderful!

During construction, the site attracted many visitors from within Bangladesh, mostly people from the surrounding countryside and government officials. Its special character raised awareness of people with disabilities.

A thatched roof on the lower part of the building was the main challenge of the project, since it was difficult to get the specific local grass, which was once widely available, due to intensive farming and overuse of fertilizers. Raising awareness is urgently needed so that communities can continue to produce their own building resources.