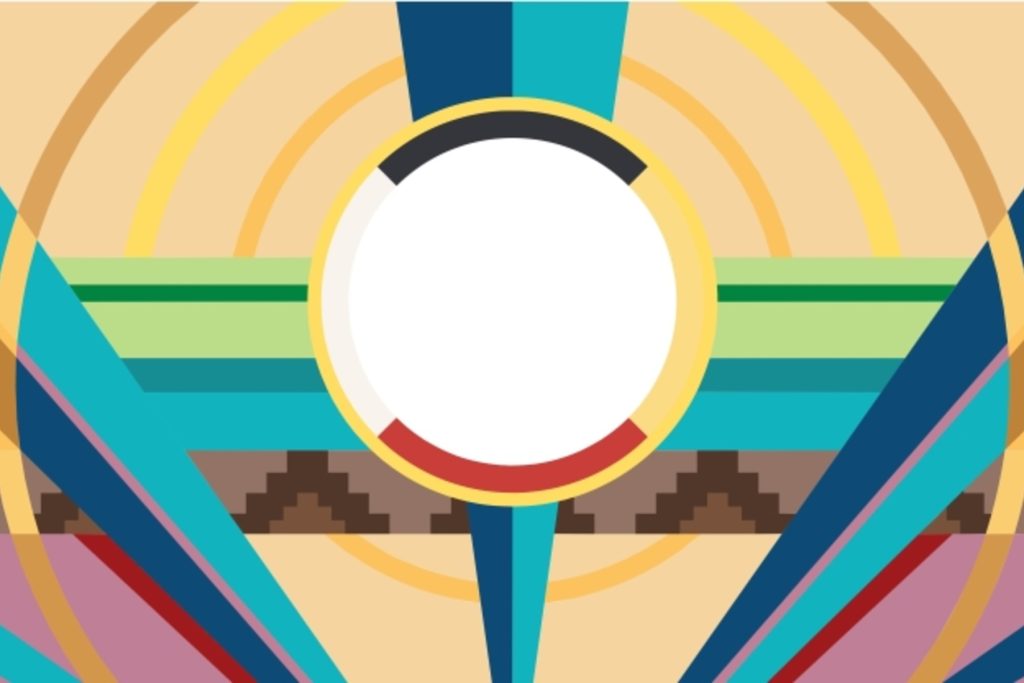 This project represents a rare collaborative effort between indigenous designers, contractors, and local cultural wisdom keepers. The mural design features a round medicine wheel window that faces to the east and features sun rays washing over a Cheyenne and Arapaho village landscape. It is the centerpiece for recovery and healing programs at the Cheyenne and Arapaho Tribes’ George Hawkins Memorial Treatment Center in Clinton, Oklahoma.

This project is a renewal of the cultural lives of the Cheyenne and Arapaho people who once called much of modern-day Colorado their aboriginal homelands. It is dedicated to men and women seeking to heal from substance abuse, ever present amongst this Native American community. To understand the intergenerational trauma that brings people to the facility, one cannot ignore the cruel fate this indigenous population has endured. On the morning of November 29, 1864, near Sand Creek in southeastern Colorado Territory, what is now known as the Sand Creek Massacre was a tragic turning point for Cheyenne and Arapaho people who lost 230 women, children, and elders that day. The barbaric attack by U.S. volunteer soldiers commanded by Colonel John M. Chivington pushed people out of their homelands and into Oklahoma. The impacts since that time have been traumatic, but fuel survival and regeneration. This project tells the story of a people turning back to their traditional knowledge and understandings to seek healing and growth.

The participation methodology included multiple stakeholders in a concept design process that asked about tribal identity and the vision for the project based on identity and cultural values. This was crucial in helping the design-build team understand the culture, people, and place in the words and hearts of the Cheyenne and Arapaho people themselves. Cultural practitioners, medicine people, and artists were central to the design process. This allowed a culturally responsive design to be brought to life that inspires healing and teaches the culture to those who may have become disconnected from their identity as Native American people.

Survivors of the Sand Creek Massacre have struggled for over 100 years to rebuild and reclaim their lives. This project serves as a lasting reminder of the power of cultural teachings as means to heal, recover, re-build, and re-take life as a citizen of the Cheyenne and Arapaho Tribes. By the process of deeply listening to community and client understandings of their own history, culture and knowledge, the design team was able to take a concept borne out of verbal dialogue and rough sketches through to a vibrant space where the end users can be inspired to seek healing and recovery from addiction. The mural is used to teach tribal values and instill pride in self and community. This is an active part of the programming at the center.

When working with cultural communities it is imperative for the design team to put forth a greater effort to ask important questions, listen, learn, and remember. Taking time to involve the community and make space for safe and open dialogue about the challenges can foster respectful ways to express cultural and traditional information that empowers and educates. This may include seeking out respected elders and medicine people in the community and working through iterative processes and feedback loops to ensure the right meanings, forms, shapes, and colors are being presented and understood.