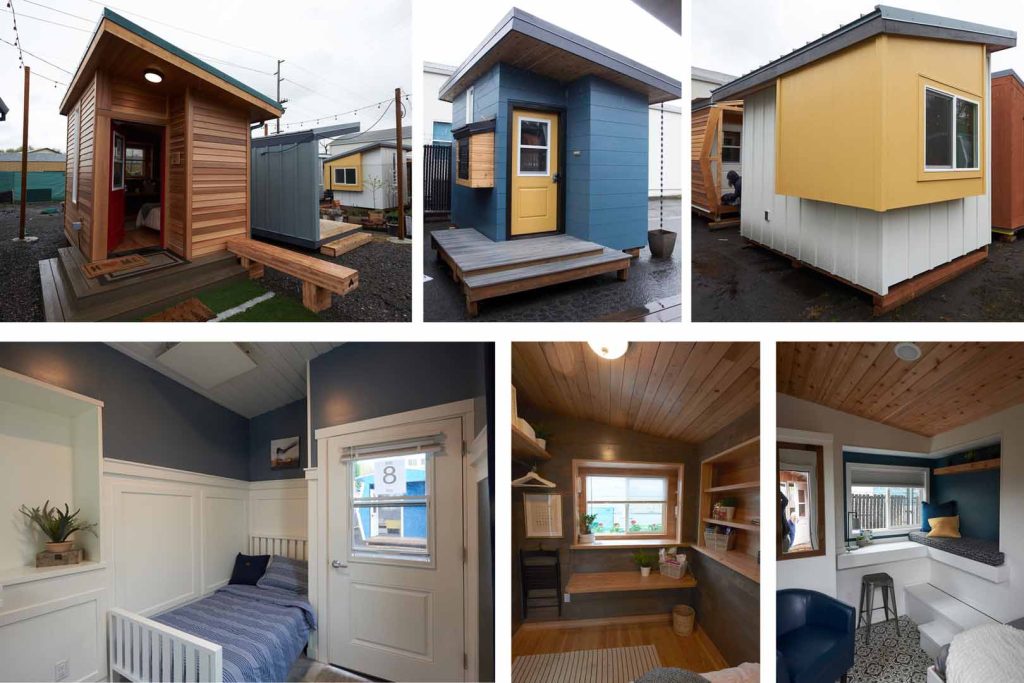 Launched in Portland, Oregon, in 2016, the POD Initiative challenged the city’s architecture and design community to generate new typologies for alternative shelter through a radically participatory design process. The initiative arose out of requests by the houseless community for solutions centered on community building, safety, and dignity—elements too often missing from traditional shelter models. Informed by the desire for “villages” consisting of individual tiny houses (called “sleeping pods”) and shared common facilities, the POD Initiative led to the creation of 14 sleeping-pod prototypes and the country’s first city-sponsored village, the Kenton Women’s Village. While alternative shelters and villages are increasingly being explored nationally, Portland’s context is unique in that it is home to the country’s first and oldest self-governed village established in 2001, Dignity Village, and the model now involves design professionals and full support from the city.

People experiencing homelessness have tried to form intentional communities for years, but city policies of “sweeping” emerging communities have allowed few of them to survive. With the declaration of a homelessness “state of emergency” in 2016, members of Portland’s houseless communities and their allies formed the Village Coalition to advocate for the village model. The group asked for CPID’s help with new designs for “sleeping pods,” common facilities, site analysis, community engagement, and the design of the villages. From the outset, it was clear that the design must also include processes for participation, funding strategies, and pathways toward legalizing these communities.

The POD Initiative began with a community-wide charette that centered the expertise of those with lived experience with homelessness to generate design visions. Pod prototype designs were displayed at City Hall, and the pods themselves were set up downtown where visitors could learn about the village model. This public outreach led to the creation of the Kenton Women’s Village.

The design teams consider these projects as an iterative series, improving each time by responding to feedback from villagers and supporters. All of the villages are networked through the Village Coalition’s effort, which supports developing processes like co-governance and self-governance.

The Kenton Women’s Village was intended as a pilot project for a replicable model, and so community support was critical. After a participatory design process, the community, which was originally opposed, was overwhelmingly in favor of the project.

Based on this initial success, the village model was refined and several more villages created. Each village represents an evolution in the design of alternative shelter models, taking a range of approaches to governance, pod design, and utility infrastructure.

What has worked has been a commitment to participatory design processes and public dialogue through charrettes, build parties, exhibits, presentations, and community meetings. CPID’s strategy of inviting the entire architecture community in the region to be involved is a key reason for the project’s success.

While these efforts have resulted in several supported villages, much still needs to be done to support informal houseless communities that are “swept” by the city before having time to grow organically. Each new village offers an opportunity to amend previous mistakes and leverage what has worked well by including villagers as design partners.