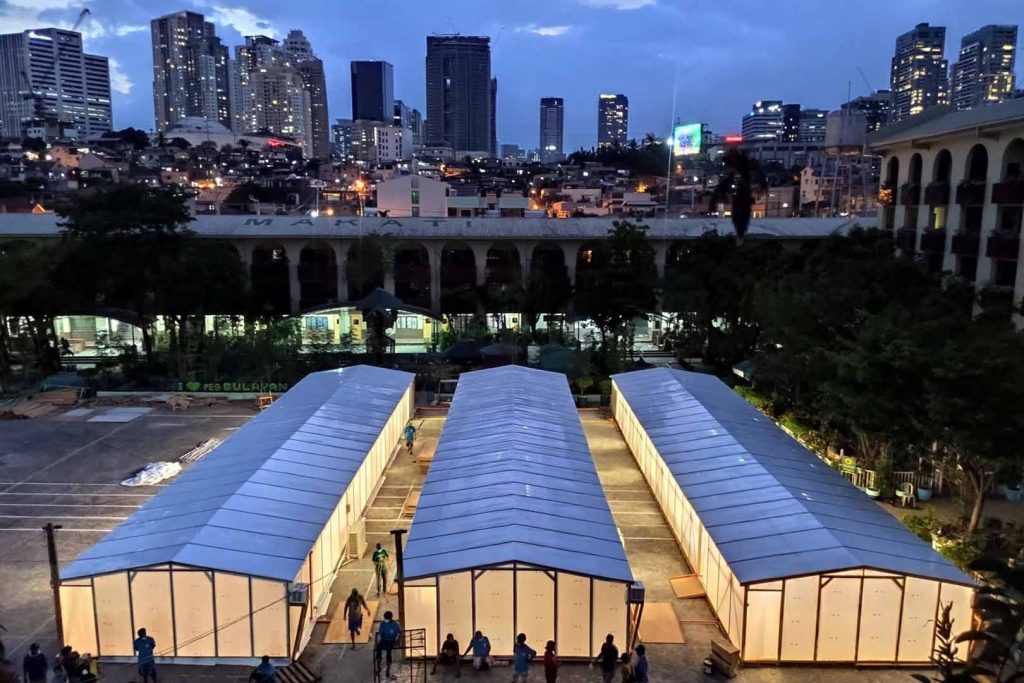 The Emergency Quarantine Facilities (EQFs) are temporary structures meant to augment the capacity of hospitals in Manila during the COVID-19 pandemic. The structures are intended to house patients under investigation (PUIs) to keep them from spreading infection. Enough facilities needed to be built to house all PUIs and allow the virus to die out. This will also prevent hospitals from becoming overwhelmed and enable flattening of the curve of the pandemic’s growth. A network of 75 EQFs with more than 1,500 beds has been built, with plans to construct a further 2,000 beds throughout the archipelago.

With the spread of the virus being so fast, the main design need is for speed and scalability. The EQF structure has to be simple enough that it can be built quickly, in five days. It must use materials that are readily available and understood so that most workers can work with them and they can be scaled up not just throughout the city but nationwide. Hyperlocal facilities also address the fear, especially for the most vulnerable members of society, of being displaced and removed to an unknown, far-off facility.

A technical group as well as a builders’ group was organized to update the design plans in real time. The plans underwent revisions three to four times a day, with hospitals and doctors providing input along with other architects and engineers. The materials used also frequently changed based on the recommendations of vendors who came on board as the project progressed. Carpenters and other laborers were constantly suggesting improvements in how to put the structures together more quickly and efficiently. Many of the building methods and techniques suggested by the builders on site were immediately applied.

Initially, the plan was to build four facilities as prototypes, but the demand of the pandemic required quickly producing 75 facilities. Almost every major hospital in the city and every local government unit requested a facility. Each facility was fully occupied after being turned over to its administrators. Many of the EQFs filled up quickly, and additional facilities had to be set up where space was available. The projected lifespan of each facility was three months, but most were under operation for six months or more.

Architects have a very wide reach and can bring together a diverse collection of knowledge and skills to help communities. They can be leaders who galvanize and build, not just provide consultations and plans. The experiential knowledge of builders is also very important to increase the efficiency of plans.

One potential improvement would have been to assign someone to coordinate better with the national government as this would have widened the reach of the project and increased available resources. The EQFs were an efficient and scalable solution, but many of the facilities built outside the project were two to three times more expensive and took much longer to construct.