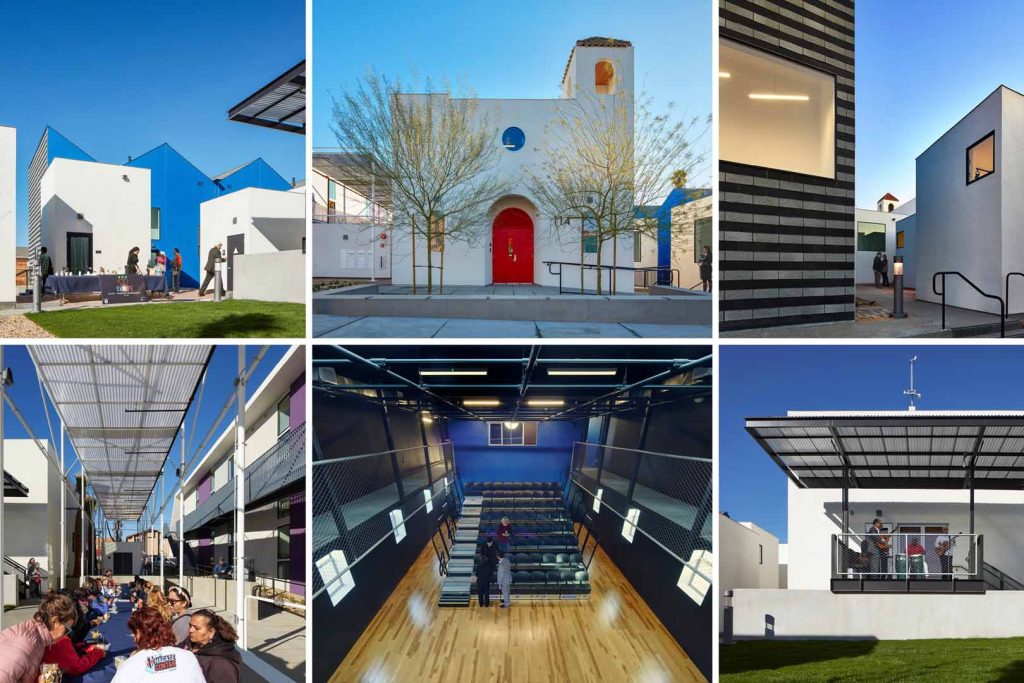 Living Rooms at the Border explores the interface between affordable housing and public space, focusing on small parcels in low-income neighborhoods, where incremental density is prohibited by current exclusionary zoning. The project is organized by a parcel-size social infrastructure, made of spaces for cultural and economic activity. Affordable housing is embedded within this socio-spatial system of support, co-curated between Casa Familiar and the University of California, San Diego (UCSD). The adaptive reuse of a historic church into a community theater with an outdoor stage anchors a series of small accessory buildings for Casa Familiar’s social programming, and an open-air civic classroom-pavilion. This social, educational, and cultural infrastructure is flanked by affordable housing that caters to different demographics and lifestyles.

No advances in affordable housing design can be accomplished without advances in housing policy and economy. This includes demanding transformations in exclusionary land-use and zoning policy, to support the social densities, transitional uses, and shared economies found in immigrant neighborhoods. One factor that contributes to the crisis of affordable housing is the conflict between exclusionary zoning and discriminatory subsidy structures. To address these critical issues, the authors and their community partners designed both the physical spaces and the protocols for inclusion, including the cross-sectorial collaborative models, and the economic proformas to advance communities as alternative developers of affordable housing.

The project emerged from a robust community engagement, organized through experimental urban pedagogical processes. The authors and Casa Familiar designed a series of community dialogues and forums, where community issues were presented and discussed to increase community’s awareness of existing social-economic policy, and to advocate for how the community’s own patterns of informal development can in fact provide the basis for transforming municipality housing policy.

The project produces tangible evidence that community-embedded, grass roots agencies are the mediators and translators of otherwise invisible neighborhood dynamics, curating cross-sectorial interfaces, linking top-down resources to community needs. The project elevates immigrant neighborhoods as sites of social-economic productivity, challenging the logics of urbanization that see the city as a site of consumption. Located at the at the San Diego-Tijuana border, adjacent to the busiest land crossing in the Western hemisphere, the project presents border neighborhoods, not as sites of criminality and division, but as the epicenters of urban and political creativity, from which a new solidaristic urbanization will unfold.

This project is part of the UCSD Community Stations, a network of field stations located in disadvantaged immigrant neighborhoods across the San Diego-Tijuana border region, where research and teaching are conducted collaboratively between university and community partners. Co-curated between Casa Familiar and UCSD, the UCSD-CASA Community Station is an unique model of long-term partnership bringing the knowledges and priorities of border communities into university research, and the knowledge and research tools of the university into border communities, to increase agency and capacity for political and climate action.

Design for the Common Good

Connect with the Community!

Join our newsletter list to stay up to date with DCG